CheckPoint’s Series HDA chemical injection pump features a “sandwich” diaphragm set consisting of three stainless steel disks constrained between the pump’s chemical head and hydraulic body. The disks can flex quite easily due to their thickness, ensuring a minimal chance of failure. In the event that one of the diaphragms does fail, the pump will continue to operate without cross-contamination between the hydraulic oil and the chemical. The pump’s hydraulic plunger and bushing are constructed of strong ceramic materials, guaranteeing long life, low wear, and repeatable, consistent chemical injection throughout the lifetime of the pump. The Series HDA pump head has several safety and indication features, and its diaphragm rupture detection system provides multiple options for indicating, including a popup tattletale, gauge, or electrical signal. It also incorporates a pressure-limiting internal relief valve with a tattletale indicator, which allows the user to see if an event has occurred.

CONTACT US TO LEARN MORE ABOUT THIS ELECTRIC PUMP

The Series HDA pump delivers up to 2.88 USG/H (10.90 L/H) and can reliably inject into pressures up to 1,000 PSIG (69 BARG). CheckPoint’s expertly designed diaphragm pump maintains its durability, versatility, and unparalleled chemical resistance due to its metallic sandwich design and the essential integration of high-quality, proprietary seal materials. In order to meet a wide variety of chemical compatibility needs and applications, wetted parts are available in 316 SS, and seals are available in Viton, HNBR, FKM, and FFKM. All wet end construction materials meet the requirements of NACE MRO175 and ISO 15156.

Whether your solution requires a single pumping application or an expansive engineered system,
CheckPoint is committed to becoming your partner in excellence. 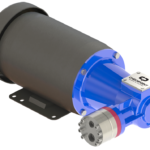 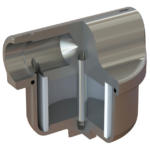